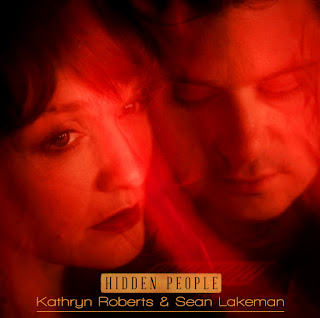 Kathryn Roberts & Sean Lakeman are a husband and wife team who – despite the very apt album title of Hidden People – have been lynchpins of the UK’s burgeoning folk-acoustic revival over the last two decades. Finally they have released an album together.

The album opens with Kathryn’s beautiful voice sans music on Huldra. This song has some background guitar and organ through some parts but it is focused on Kathryn which I cannot argue with it. It’s an absolutely beautiful song.

Oxford, NY comes next and is a lot more upbeat with Sean’s excellent guitar playing throughout. This guy is seriously skilled and his style works incredibly well with Kathryn’s voice.


Next up is Money or Jewels which is probably my favourite song on the album. It’s just absolutely beautiful – You’ve got wonderful acoustic guitars, powerful lyrics, Kathryn’s voice and Sean even sings for a duet which harmonises incredibly well. This is the perfect folk song.

Another incredibly powerful song is The Ballad of Andy Jacobs. Kathryn plays piano on this song, and good she is too. Her voice is incredible throughout the whole album but this track is just so full of emotion. I remember listening to it for the first time and I almost had a tear in my eye because it’s so beautiful; even now after a few listens I feel the same way. It’s simply phenomenal.

The album continues with more beautiful instrumental and vocal talent. It gets a bit livelier like traditional folk with Lusty Smith which features Sean playing a mandolin and Standing At My Window is a faster one too which is great. The album then ends on another beautiful note with Jackie’s Song.

All in all, this is an absolutely beautiful album. Anyone who likes acoustic music in any capacity should go out and buy this album right away. It has everything you’d want in an album of this ilk.

Kathryn Roberts & Sean Lakeman – Hidden People is out tomorrow, Monday 9th July on Navigator Records and will be available to buy from any sensible music retailer.

You can watch the live video for The Ballad of Andy Jacobs below: