By Unknown - July 18, 2012
As soon as I posted my first ever Booze guest blog from Rich and announced my first ever Beats guest blog from Mr Barfly, I had literally hundreds of requests to do a guest blog for me. Literally hundreds. I finally managed to narrow it down to one. Then this guy, Martyn from the twittersphere approached me with the idea of completing the Booze, Beats & Bites circle with a Bites guest blog as I don't do many bites posts and I couldn't help but oblige. This also makes me think that I need to write about food more. Note to self.

Anyway, Martyn has come up with a wonderfully bizarre and awesome sounding recipe that I need to try out...

“Do you ever have that feeling when several things all happen at the same time you start to think there could be fate?. I had that this week. I received some annoying news, when I'm annoyed I often feel like baking to take my mind off it. I did a shout out on twitter asking what I should make. Nate said cornbread, I'm not sure if he had been drinking or not. My girlfriend said chocolate, peanut butter, marshmallows, she hadn't been drinking. Guess which one I went with. I decided to make some brownies. A guest spot opened up on this blog and then Nate kept banging on about Peanut Butter Stout on twitter so the idea was born "Chocolate Stout Peanut Butter Marshmallow Brownies". Fate, no! Coincidences, yes!

I couldn't find a recipe that had all those ingredients in so I did what I guess Craft Brewers do. I took a basic recipe I know works and banged in a bunch of other stuff and hoped for the best. Even if it didn't work it's still going to be tasty. If a chocolate peanut butter marshmallow stout comes out any time soon I want a mention. 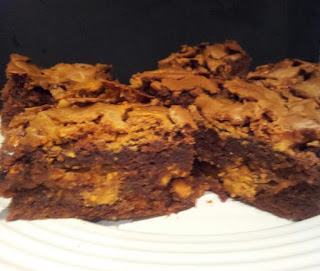 This recipe fills a 9"x9" tin that you should probably line so that it doesn't stick. You need the oven at 180°C when you are ready to get your bake on.

First off you need to melt the butter and chocolate together. I tend to melt chocolate in a small bowl over a pan of simmering water. But you can do it how ever you want, I wont judge you for putting it straight into a pan or even in the microwave. Like making love to a beautiful lady as long as you are gentle everything will be fine.
While the chocolate and butter are slowly melting together, cream the sugar, eggs and vanilla together until pale and fluffy. Once the chocolate is melted and cool (it shouldn't have been hot if you were gentle) add this to the eggs and sugar. At this point I added the Rip Tide and mixed until fully combined.

Sift in the flour and mix together, brownies don't need to be coddled so don't fuss over this part. As I made this up as I went along I cut up a bunch of marshmallows and mixed them in.
Heat up the peanut butter so that is a little bit runny. Bang the brownie mix in your tin, blob the peanut butter on top and then swirl in a bit to marble it.
That's it, whack the tin in the oven for about 45 mins or until it's cooked. The original recipe takes about 35 minutes but adding the stout makes it wetter so takes a bit longer.

While the brownies are cooking it's time to clean up. Take the batter covered spoon in your mouth, pull it deeper,  feel it at the back of your throat and then to the front again. Swirl your tongue around the end. It's your very own Chocolate Stout flavoured popsicle. Suck harder and harder, your inner goddess should be doing the meringue with salsa moves. Delicious!!! #50ShadesOfBrownies

Once cooked, let it cool in the tin before trimming off the edges to have with ice cream and cutting the rest up in squares. These didn't come out as I was expecting, the marshmallows fully melted but made it like there was a sticky caramel running through them. The stout really cuts back the sweetness and chocolate, giving another rich dimension. Then there is the peanut butter, oh the peanut butter. Have you ever had salted caramel? The peanut butter adds a saltiness that just brings everything together. Would I make these again, you bet I would. Would I tweek the recipe, sure, but that's what baking is all about.

Making brownies is easy, if you haven't done it before you should give it a go. Throw a bunch of stuff in a bowl, mix it up, put it in a tin, whack it in the oven, let it cool down and stuff it in your face.”

I will certainly be making some of these this weekend!

I want to thank Martyn for making these crazy-ass brownies, sharing the recipe with us and probably making a mess of his kitchen whilst doing so!

Check out his blog at: http://feedthetramp.wordpress.com

If you decide to make some awesome brownies like this (and no doubt you will) please share with me pictures and what stout you used, I'd be interested to know!