Beats: Karybdis - From The Depths review 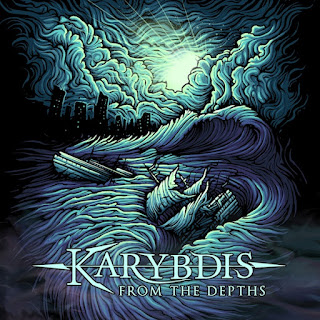 Karybdis are a London based death metal band who focuses on mythical themes within their songs.

The album starts off with the sound of waves and a violin on Minotaur before a technical electric guitar arrives in the background then an almighty death metal growl with the drums. The waves and light guitar fades out and it gets heavy... technically awesome and heavy. The vocalist is also one of the best I’ve heard in this genre of music in a long, long time. The guitars are great, takes me back to the proper old school death metal style of At The Gates and other bands of that ilk.

Next up is the title track From The Depths which is definitely my favourite track on the album. It starts off with a wonderful death metal riff before the vocals and other instruments blast in. There’s a nice consistent riff going throughout the whole track and the vocals are simply brilliant. Vocalist Rich O’Donnell & backing vocalist Jay Russell really work well together with Rich having quite a deep voice and Jay having a more high pitched voice; the lyrics on this one are particularly worth mentioning with the chorus of “I am the devil on your right side; you are the demon whispers in my ear”, it just works so well and reminds me of 3 Inches of Blood.

Another notable mention is Worth It which features guest vocalist and hero of the French underground death metal scene Gil Renault. Gil has that classic death metal voice and it really harmonises with Rich’s quite well. My only issue with this track is the drumming – it sounds a bit echo-y which is something I could never get on with.

All in all, this is a brilliant death metal album – think old school death metal but modernised and mythical. That probably doesn’t make sense but I’ve said it anyway.

I really fucking love it and won’t be taking it off my iPod anytime soon...

Karybdis – From The Depths was released on Monday 2nd July and is available to stream and purchase on their bandcamp page: