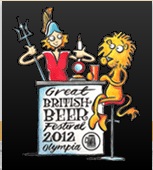 Yesterday I went to The Great British Beer Festival. Originally, I wasn’t going to go but a friend from twitter offered me two tickets to the Trade Session so I thought it would be rude not to go. It would give me the chance to put a face to all of these 140 character personalities.

So I did it. I embarked on a 3 hour coach journey from Norwich and met my mate Tom. Was it worth it? Oh hell yeah it was.


Last week I did have a bit of a strop about the beer list being not what I wanted it to be but there were genuinely some incredible beers there and here is my list (Apologies for the lack of proper tasting notes but I was seriously overwhelmed by everything – Also, they’re in order of memory, not drinking and I probably had more but these are what I remember):

Brentwood Project Venus Sugar And Spice – As far as I understand, Project Venus is a group of women who are promoting women in the UK and Eire brewing industries and this is a collaborative beer with Brentwood Brewery. I kind of semi reviewed it for The Beer Beauty as they were launching it at GBBF >> http://youtu.be/rdmLqvnESHY

Durham White Stout – I’d heard a lot about this beer from various bloggers so I thought I had to try it. 7.2% but doesn’t feel it – creamy, white chocolate and a little peppery with a few hops thrown in for good measure.

Sierra Nevada Torpedo – A beer that I’m already in love with bottled. Was amazed to see it cask. Other people have said it wasn’t very nice but I enjoyed it. Not as much as bottled, but it was nice. Maybe it was the fact that it tasted VERY pithy that put people off.

Sandstone Edge – A good golden session ale. Light citrus and bitterness. It doesn’t punch you in the face with hops so it’s something I could drink all day.

Brains Barry Island IPA – Very disappointed. Sorry Simon, I appreciate the effort you put in, working with Brains. I just wasn’t a fan. I’d like to give it another shot, though, as I didn’t think it was in the best condition.

By The Horns Stiff Upper Lip – Not a fan of this one either. Way too malty for my liking. Didn’t detect any hops. It also smelled dreadful.

Okells Saison – I remember this being the first beer I had. A nice refreshing saison to start the day with after the long journey. Sweet, orangey and a bit yeasty.

Otley O4 Columbo – Resinous, sweet & piney. It was alright. Don’t remember too much.

Saltaire Elderflower Blonde – Wow, you can really taste the elderflower along with lots of citrus and zest. Love it.

Fuller’s Wild River – I’d heard hype about this so I thought I’d give it a shot and y’know, it’s Fuller’s doing what they do best; consistently good beers! This one is hoppier than your average Fuller’s beer, however, with a lot of mango and lemon going on and a dry, bitter finish.

And now, for the grand finale; NATE DAWG’S CHAMPION BEER OF GBBF (Or NDCBOGBBF for short), the one I was actually most looking forward to drinking…

OFFBEAT WAY OUT WHEAT – I bloody love wheat beers and it’s rare that you find one on cask that can match all of the qualities you get in a German wheat beer. This is one of those rare occasions. Nice big banana and clove flavours all over it with some bubblegum. It’s the only beer of the whole festival I went back and bought a full pint of after sampling a half. Fucking awesome is the way to describe it.

Y’know, as with any beer festival or long, multi-beer drinking session there are going to beers that really shine for you, beers you don’t have any special feelings about and beers you flat out don’t like. Thankfully, however, most of these were good beers.

After the festival, I headed to Cask Pub & Kitchen with David (Check out his blog and follow him on twitter) and had a pint of a beer I very much love, Camden Town Hells. Beautifully refreshing beer to end my trip to London.

I want to thank Chris for the tickets & Tom for coming with me. I had a great time, chaps.

It was nice to meet loads of people with whom I’ve had conversations with on twitter in the past including: The Beer Beauty, David, Chris, Zak, Jono, Laura, James (I hope you enjoy the eurovision album) and other people I’ve forgotten (Let me know if I forgot you!).

Was also awesome to see Norfolk being heavily being represented by Dawn & Kev from Norwich Bear Brewery, Stephen & the crew from Humpty Dumpty & of course, The Fat Cat Crew.

I also noticed the envious look on everyone’s faces when they saw my Carling t-shirt. Sorry, guys, it’s mine and you can’t have it.

Thanks for an awesome time, everyone; thanks for the chats, the laughs and the shared beers. I hope I can see you all again very soon!

And finally, thank you CAMRA for putting on yet another truly great Great British Beer Festival. I actually thought The Olympia was a much, much better venue than Earl’s Court.