I had heard rumours of a new brewery popping up on Scottish shores but I knew not of the name. I heard they were doing something different to what most new breweries in the United Kingdom are doing so I was instantly interested. I then got followed by a brewery on Twitter called Old Worthy, i hadn't heard of them before and there wasn't a great deal on their website; in fact, it was just one page with a few pictures and a email address sign up box saying that they'll alert me when the beer is available. I don't remember whether or not I signed up, in all honesty. One day I signed in to Twitter to find a tweet asking if I would like a sample... 'why not?' i thought and sent the email.


Just a couple of hours later, I got a reply from Nick who seems to be the main man; he had attached some images as well as the sales presenter PDF. The sales presenter is awesome. It's beautifully laid out and informative. It explains that the name 'Old Worthy' comes from the whisky men in who helped themselves to the distillery 'wash'; a form of 'beer' from which whisky is distilled.

It goes on to explain that it is designed to drink as a 'half and half'. Apparently, a common thing to do with such beers in Scotland is to drink a single malt whiskey with a beer chaser. I had never heard of this before so I thought that the best thing to do is to call my good buddy Stu who manages the Ten Bells pub inNorwich and invite him to taste it with me. I call the Ten Bells a pub but it's more of a whiskey bar. Despite being Greene King, it's alright. They've got a large selection of spirits including around 100 whiskeys from around the world, a handful of vodkas, a few gins and some other spirits. Beers are pretty standard but it has a great atmosphere and wonderful bar staff so I don't mind; besides, I'll usually order an Old Fashioned when I go in there anyway. It is the original cocktail, after all.

Anyway, Stu is my go-to guy when it comes to whiskey. Stu knows his shit. He teaches me about whiskey and i teach him about beer; it's a fair trade! We were meant to be drinking this on Friday but in a hungover rush to get ready for work, i stupidly left the bottle at home. Luckily i remembered the bottle when heading out on Saturday, so this is when it occurred.

For our half and half, Stu chose Talisker as it is the only distillery on the Isle of Skye which is where Old Worthy is brewed so it made sense really! We also thought the perfect glassware to use was a a snifter. 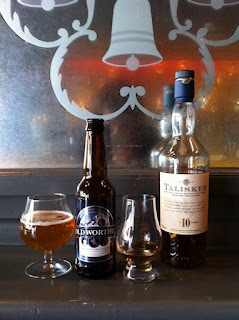 It's quite pale with a bright white head that quickly disappears.

You get a heavy whiff of the peated barley along with roasty oats.

Peated barley but not overpowering. We really couldn't taste hops but that's irrelevant really as it's not what this beer was designed to be. The peatiness fades into a smooth oakeyness which is really quite pleasant.

With Talisker - Take a sip of Talisker and you get that heavily peated, smokey and almost burning flavour. Shortly after, you take a sniff and a sip of the Old Worthy. Holy shit. Even though Old Worthy is quite peaty, it's very mellow and cuts through the harsh flasvours of the Talisker. It progresses and has a really short, sweet finish.

It’s quite creamy as it glides across the palate with a little bit of that spikey feeling you sometimes get from hops, especially with the slight burn of Talisker.

Would Stu & I buy this beer? Just tell us how. Being a brewery whose beers don't really exist right now, we weren't sure what to expect but we really were impressed. If i was at home, I would've drank it without the whiskey as I generally don't have any at home bit I would have still enjoyed it. With the whiskey, however, it was a soul destroying match. I'm a massive hop head really so this was quite a revelation! We have decided that it would certainly pair well with a decent smoked cheese...

I absolutely cannot wait for this beer to get unleashed on the public and when it does, i will be purchasing some.